Are you a U.S. citizen who holds investments in a Thai provident fund as part of your compensation packages? Or do you hold investments in financial products such as LTFs and RMFs? Or perhaps you've participated in an offshore savings plan from companies such as: Friends Provident International, Hansard International, Old Mutual International, Skandia, Zurich, Generali, or RL360.

If so, you are a shareholder in a Passive Foreign Investment Corporation (PFIC), which has different U.S. tax reporting requirements, and can incur significant tax liabilities if not properly handled. Although it’s generally advisable for U.S. taxpayers to steer clear of PFICs, there are specific situations where they can make financial sense.

Join us for our deep dive into the U.S. income tax implications for shareholders of PFICs. Learn which of these investments can be useful, and how best to report them on your U.S. 1040 to avoid creating tax problems for yourself later.

Peggy Creveling is Executive Director of Creveling & Creveling, a private wealth advisory firm that specializes in helping expatriates living in Thailand and throughout Southeast Asia. Previously she has held management positions at Citigroup, Salomon Smith Barney, and Paribas Asia Equity. Peggy holds the CFA and CFP®  (US) designations, and graduated with a B.S. in Economics (Mathematical) from West Point. 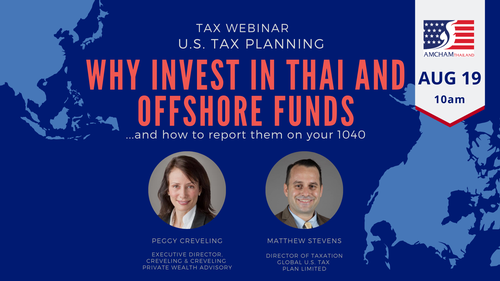