Back to Business: An Update on Travel for Asia-Pacific 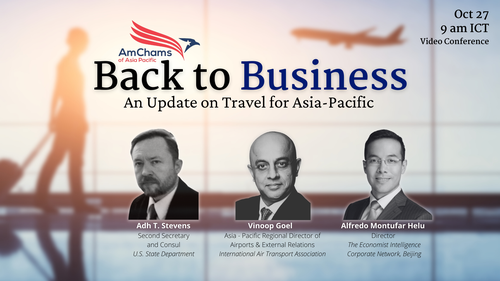 As countries worldwide prepare to re-open their economies, international travel is poised to resume. However, in the absence of globally accepted vaccine regulations and passports, would-be travelers need to navigate a complex and rapidly changing patchwork of vaccine, testing and quarantine requirements, specific to each destination. At the same time, tourism industry players face the challenge of restarting in a vastly changed operational environment.

Join the AmChams of the Asia Pacific (AAP) for a regional conference on the immediate issues facing international travel. Our three distinguished speakers include:

Breakout Discussions. After the plenary presentations, participants will be invited to join destination-specific breakout sessions, where there will be the opportunity for networking and interactive discussion about country-specific information. Each breakout session will be led by an AmCham Executive Director and a leading expert in the travel field. Destination rooms include:

Alfredo is responsible for overseeing The Economist Intelligence Corporate Network in Beijing. Based in China since 2013, he has focused on analyzing the business implications of policy, economic and political developments for companies investing and operating in China, and in the broader Asian region. This with the aim of distilling complex issues and conveying clear takeaways on how to capture business opportunities and respond to emerging challenges. Previously, Alfredo was Associate Director for KPMG's Global China Practice, where he led and contributed to numerous thought leadership projects, including flagship reports, customized business briefings, and policy proposals for Chinese authorities. He also played a large role in events programming and outreach, including leading the design and coordination of high-profile events aimed at senior executives.

Vinoop leads a team that is responsible for all IATA's activities in the Asia-Pacific region relating to Airports, Passenger Facilitation, Cargo and Security. In addition to this, Vinoop also heads the Member and External Relations department for the region that is responsible for IATA membership and government policy issues such as environment, taxation and aviation regulatory matters. He is based at  Asia-Pacific regional office in Singapore. Vinoop has a degree in Computer Science and Engineering from IIT, Delhi in India. He has 3 decades of aviation industry experience including a 15-year stint in Japan and has been with IATA since 2005.

Adh is a U.S. Department of State Foreign Service Officer currently serving in the U.S. Embassy Beijing Economic Affairs Section. Adh's portfolio as the Transportation Affairs Officer covers aviation, new energy vehicles, autonomous and connected vehicles, shipping, rail, and logistics. Adh previously worked at the U.S. Embassy in Mexico City, Mexico as well as in the U.S. Consulates General in Shanghai, China and Ho Chi Minh City, Vietnam. Before joining the Foreign Service, Adh worked as a corporate financial analyst. He received his M.B.A from the Marriott School of Management and his B.A. from Brigham Young University, where he studied translation and interpretation.

Nancy Lyu, Director, China Regional Sales, United. Nancy is the China Regional Sales Director of United Airlines. Based in Shanghai, she is responsible for passenger sales and marketing. Nancy has more than 20 Years of experience in the aviation industry and worked as executive for many international airlines. She started her career with United Airlines as manager of China Call Center and ticketing department. Nancy had serviced Cathay Pacific Airways from 2004 to 2008 as the regional sales manager of Eastern China. From 2008 to 2011, she worked for Continental Airlines as the Assistant Country Director of Eastern China and successfully launched Shanghai to New York daily non-stop service in March 2009. After merger of Continental and United in 2011, she was relocated to Beijing. With her expertise and great efforts, United pioneered into the new frontier of China's secondary cities.

Helen Zhang, Pharm D., Director of Pharmacy, United Family Healthcare, Director of Center for Clinical Research, Beijing United Family Hospital, Lead Clinician, Immunization Network, United Family Healthcare.Dr. Zhang is a native from Hong Kong and graduated from University of California, San Francisco in 1989.  She has been working for South San Francisco Kaiser Permanente Hospital before she returned to China in 2001. Dr. Zhang has extensive experience in hospital pharmacy, in particular, promoting pharmaceutical care in multi-disciplinary areas and ensuring medication use safety. Dr. Zhang is a registered pharmacist in both China and California and Board member of the Chinese Society of Hospital Pharmacists.

Yvonne Chan, Regional Director – APAC, Universal Weather and Aviation. Has almost three decades of experience in business aviation and is familiar with ground handling and flight operations in Singapore and the APAC region. Currently serves as Regional Director APAC for Universal Aviation. Yvonne has been instrumental in helping Universal Aviation establish other locations in the Asia-Pacific region. Yvonne and her team in Singapore have earned accreditation under the International Standard for Business Aircraft Handling (IS-BAH) program and won numerous awards over the last decade including an AsBAA Icons of Aviation award. Under her leadership, Singapore is one of the top rated FBOs in the APAC region as reported by AIN’s FBO survey for 2021.

Scott Smalley Managing Director, DSV Solutions in Japan. A native Michigander, Scott Smalley, is currently Managing Director of DSV Solutions in Japan, and has been in Supply-Chain management and logistics for over 25 years. A graduate of Michigan State University, Scott started his career in Japan in 1994 with a domestic warehousing company. 10 years later he established the warehousing business unit for a leading Swiss German 3PL. A member of ACCJ the entire 18 yrs he was living in Tokyo, Scott recently returned to Japan after spending 10 yrs at his home in Michigan and also Seattle - while learning more about the North American logistics market and developing business with Japanese consumer electronic companies globally.

Kuniko Nakamura is the Director for External Affairs at the American Chamber of Commerce in Japan (ACCJ). She leads ACCJ’s advocacy efforts with internal and external stakeholders. The ACCJ is currently actively advocating for the easing of border enforcement measures and vaccine certification. The ACCJ also strives to keep its members updated with the latest information on pandemic related entry/re-entry issues on their website.

Gary Bowerman is an experienced Asia travel and consumer trends analyst and consultant. Based in Kuala Lumpur since 2010, he previously lived and worked in Shanghai from 2004-2010. A member of the World Tourism Network and Mekong Tourism Advisory Group, Gary works with leading hotel groups, tourism boards, OTAs and travel organizations. He has produced White Papers on the travel economies of China, South East Asia, Australia, China, India, Japan, Myanmar, Malaysia, Laos and Macau, plus a 20-year retrospective of Ctrip/Trip.com.

Adam Castillo, Managing Director and Partner of Atalian Global Services Myanmar, a Yangon based Facility Management service provider. In 2010, Adam joined the United States Marine Corps (USMC) as a commissioned officer. After completing his active duty requirement which included a combat deployment to Afghanistan in 2012, Adam began visiting Myanmar at the end of 2013. He then founded a security company with two other American entrepreneurs under the name of Scipio Services -MAC Security, which became a founding member of AMCHAM. In 2016, Adam successfully negotiated a partnership with a global facility management company, Atalian Global Services. He then rebranded his company Atalian Global Services Myanmar and began offering other service lines outside of security.

Rachel Davidson, Cluster General Manager of Hilton and DoubleTree Sukhumvit Bangkok. She has enjoyed a successful career in the hospitality and tourism industry spanning over 25 years, the last eleven of these with Hilton Hotels and Resorts. An Australian national, Rachel?s career has encompassed General Manager? roles at hotels and resorts throughout Australia, China, Japan and Thailand. During this time, Rachel has also held a number of director positions in various organizations including President of American Chamber of Commerce in Okinawa (2016 - 2018), Vice President of Chatan Tourism, Chair of Tourism Whitsundays, President of Hotels Sales and Marketing Association, Victoria and Director of YWCA, Melbourne.

Tran Trong Kien  Kien is the Founder, Chairman, and CEO of TMG, an integrated travel group in Southeast Asia focused on hospitality, aviation, online and destination management. TMG employs over 2,000 people and owns hotels, boats, airplanes, train cars, restaurants, and online platforms. Kien graduated as a Medical Doctor from Hanoi Medical School, holds a BA in English from the University of Foreign Languages and International Studies in Hanoi, and earned an MBA from the University of Hawaii. He is a longtime member and strong supporter of AmCham and also serves in leading roles on the Vietnam Tourism Advisory Board (TAB), Hue Tourism Advisory Board (HTAB), Vietnam Tour Guides Association (VTGA), Trustee of Fulbright University Vietnam, Vietnam Tourism Association (VITA), Board member of Vinaland, Vietnam Institute of Directors (VIOD) and former board member of ACB and VP Bank.