Registrations for this dinner will open 3 weeks prior to the event.

3 Event Vouchers may be redeemed as payment or 3,000 baht. Members-only. Participation is limited to one representative per company. Entrance includes a three-course meal and wine.

Pre-Payment Required:  Coupons should be delivered to AMCHAM office or payment made no later than 8 March.

Note: Even if the event is fully booked we encourage you to sign up for the waitlist as we are sometimes able to offer places in case of cancellations. 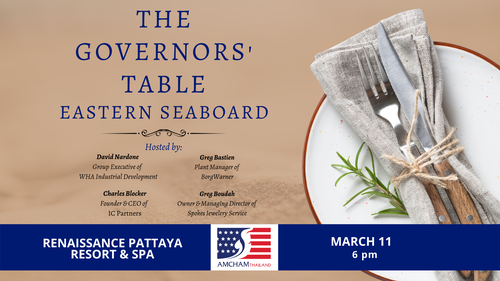 The Governors' Tables offer an opportunity to connect to leading executives and AMCHAM Board Governors over leisurely dinners. The small group size allows for individual introductions followed by relaxed, wide-ranging conversations with leaders from diverse industries and businesses.

This evening’s venue is The Renaissance Pattaya with spectacular views over the Gulf of Siam. 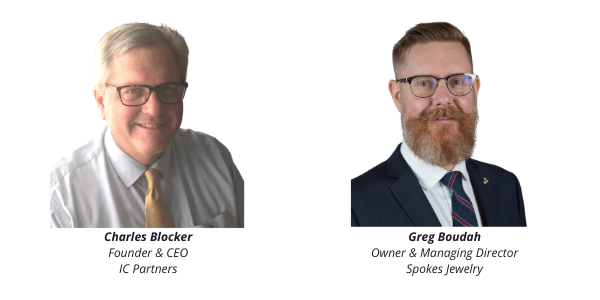 David Nardone is Vice Chairman of the Board of Directors, Executive Director at WHA Corporation Public Company Limited. He is Group Executive Industrial and International, Executive Director at WHA Industrial Development Public Company Limited (Previously Hemaraj). Before joining Hemaraj in 1993, David held senior financial and manufacturing management positions in the computer industry residing in U.S.A., Thailand, and Hong Kong. David completed a BSBA in Finance and Entrepreneurship and a MBA at McKim D’Amore School of Business of Northeastern University in Boston, Ma. U.S.A. His activities at Northeastern University include Alumni Leader Programs and as an Advisor for the Center for Emerging Markets (CEM) at the McKim D’Amore School of Business. David contributes to economic forums and articles on automotive, industrial, investment and competitiveness. David resides in Bangkok with his wife Sirima and one of four children. Interests include architecture, Red Sox, tennis, jazz, cigars, poker, and Italian wine.

Charles Blocker is Founder and CEO of IC Partners, with more than two decades of experience in capital raising, corporate finance, and commercial real estate. He is also a senior member of the advisory boards at Young Happy, and Singapore based AJT Holdings Pte. Ltd. which owns the Wellity and Dr Map brands.    Charles earned an MBA at the Kenan‐Flagler Business School, University of North Carolina‐Chapel Hill, with honors. He currently serves as a Trustee of The Kenan Foundation Asia and is a member of their Executive Committee. Charles served as a Governor and Vice President of the American Chamber of Commerce in Thailand from 2004 through 2007, and was elected back to the AMCHAM board in 2021. Charles resides in Bangkok with his wife and two children.

Greg Boudah is Owner & Managing Director of Spokes Jewelry Service, a  Treaty of Amity Company and a leading provider of jewelry design and production for global brands throughout the U.S., Europe, Australia, and the Middle East. Spokes Jewelry was recently presented with a Gold Award from American Embassy Bangkok for Extraordinary Dedication and Service to the Peoples of Thailand and the United States. Prior to founding Spokes Jewelry, Greg served in the U.S. Marine Corps for over 10 years and is a decorated Iraq War Veteran. He is married with one child.

Gregory Bastien is Plant Manager of BorgWarner.  He was previously with American Axle & Manufacturing for eight years., during which time he grew the business within Thailand to include extensive localization of all product needed to support and vertically integrate the business within Thailand.  Prior to this, Greg was the Managing Director of AAM’s operations in Curitiba, Brazil, during which time the business expanded extensively to support local growth and international customers located in Argentina, Mexico, and Germany.  Before joining American Axle & Manufacturing 19 years ago, Greg served in the U.S. Military for ten years, leaving the service as a Captain. He graduated from the United States Military Academy, West Point, NY with a Bachelor’s Degree in Aerospace Engineering and a MBA from Spring Arbor University.